Showing posts from September, 2007
Show all

- September 21, 2007
Thanks to Digg , I found a very interesting blog from Jesse Ruderman, Indistinguishable from Jesse . Jesse has a great post on how you can help in the effort to remove memory leaks in Firefox . Of course not all of us have the skills that Jesse and others working on Firefox have, but he indicates there are other things we can do to help. If you're a Firefox user, an easy way to help is to browse with a trunk nightly build wrapped in a script that calls leak-gauge.pl when Firefox exits. If it reports that documents or windows leaked, try to figure out how to reproduce the leak and then file a bug report. In addition to coverage on Firefox, Jesse has assemble a wealth of useful information in the 4 years of writing his blog. For example, he has a link to his del.icio.us links , a list of 43 things he wants to do, and a humor list . So if you're looking to learn more about Firefox or just looking for a good blog, give Indistinguishable from Jesse a look.
Post a Comment
Read more

- September 19, 2007
If you're lucky enough to have free access to a wireless Internet hot-spot, it's easy to connect your entire home network to it and get free Internet access. David A. Karp explains how with just a few slides at PC Magazine (pcmag.com). This is a great solution if you live in an apartment complex or close in the city.
Post a Comment
Read more

How much do you really pay attention to the logos of Internet companies? I bet not as close as you think you do. Go to guessthelogo.com and find out for yourself. This is a simple, 10 question, multiple choice quiz; how well can you do? I was just a bit under 2 minutes -- good luck!
Post a Comment
Read more

- September 18, 2007
I recently learned about a new beta music service, MediaMaster . MediaMaster provides the ability to upload your music collection and then access it from any PC. In addition, you can stream it to your PC or portable device, such as a cell phone. You have the ability to create playlists and a radio station that others can listen too. You can also create a widget to embed in your website -- choose from recently played to newly added to a playlist. Here's my recently played list -- click the play button to listen. So far, so good -- looks compelling. Well with the good comes the not so good. I have over 1500 music titles in my collection, and 3 days into it, I am still uploading. I can adjust my upload speed from as little as 100 Kbps to 5,000 Kbps -- it just takes a long time. In addition, the site responds very slowly. Perhaps because it is still beta or perhaps it's slow because my uploads are being processed, but it is definitely slow. In addition, the find functionality to
Post a Comment
Read more 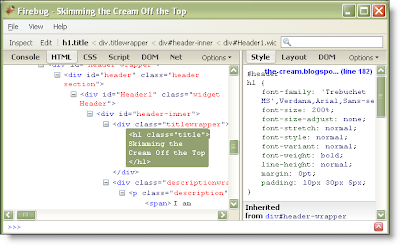 I have been using the Web Developer toolbar for Firefox for some time now, but I recently learned of a new, powerful Extension, Firebug from Joe Hewitt. Firebug makes it very easy to inspect different portions of your code while on your web page. For example, click the Inspect tab and then you can see the related code as you hover over different elements on the page. Where the Web Developer toolbar makes it easy to look at different parts of the code on a page, Firebug lets you interact with the page and subsequent code. If you want to see how fast (or slow) the various elements load on the page, click on the Net tab. In addition to showing the time to load the various elements, it is very easy to filter by element types such as JavaScript, images, and even Flash. You can use Firebug as a part of your browser window (while you're interacting with it) or in its own window. the one drawback I see is that each time I change tabs, the new website is processed by Firebug; not that it&
Post a Comment
Read more

- September 15, 2007
The Red Ferret Journal recently reminded us (original post June 2006) about Tim Berners-Lee's position on Net Neutrality . I thought it was a good reminder, as we are gradually seeing more and more restriction being placed on activities such as peer-to-peer and Internet telephony. Berners-Lee's video simplifies the issue very nicely: If I pay to connect to the Net with a certain quality of service, and you pay to connect with that or greater quality of service, then we can communicate at that level. But the phone and cable companies are using their deep pockets to keep the government from stepping in and protecting the people. Check out Exposing the Justice Department’s Hit Job Against an Open Internet from Save the Internet blog and decide for yourself. If you're looking for a more independent view, see PC Magazines article released this week: Senate Chair Takes on FTC in Net Neutrality Fight . To conclude, if you haven't notified your Congressional leader
Post a Comment
Read more
More posts